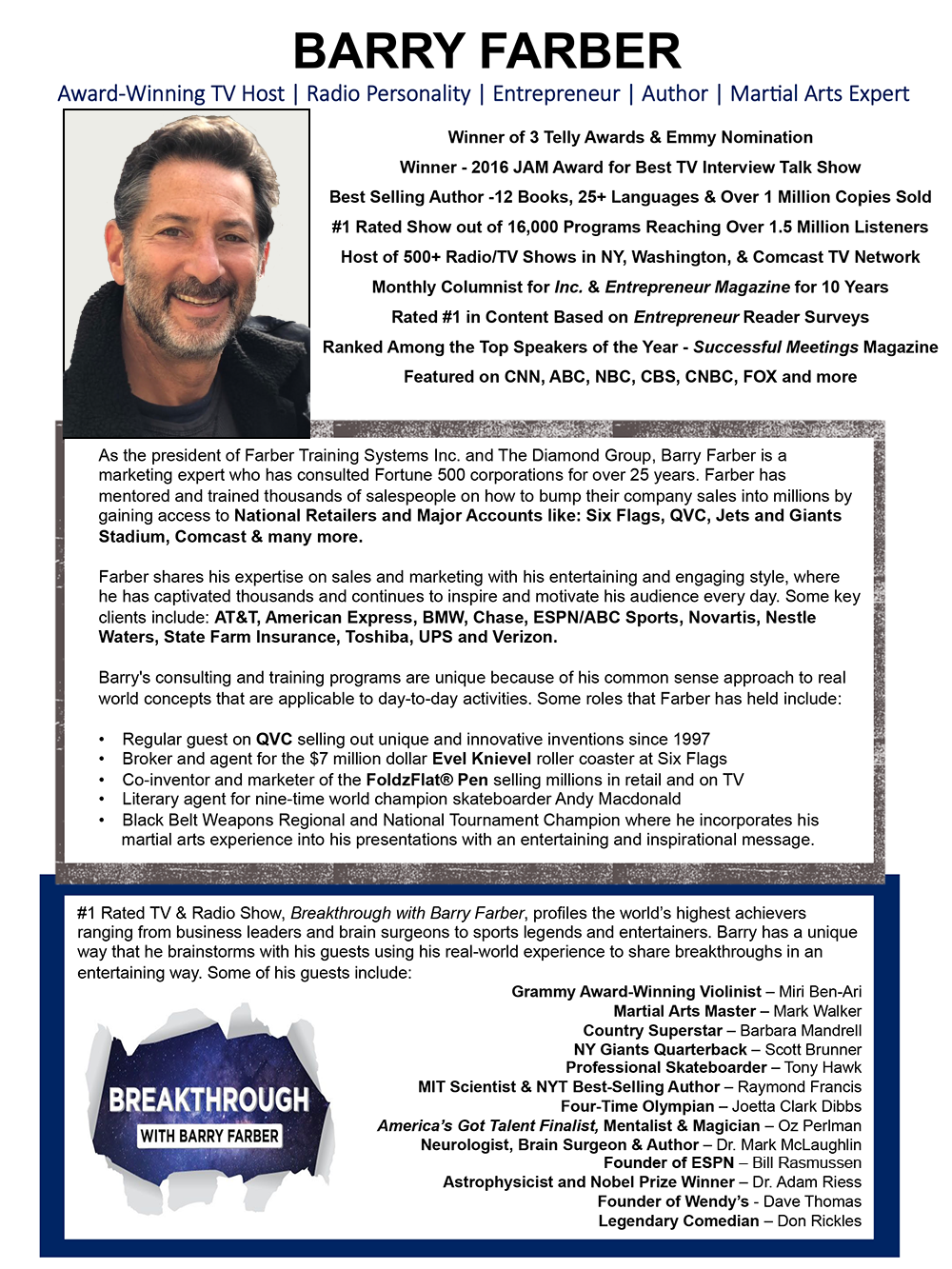 If Deepak Chopra and Tony Robbins are your fuel, then Farber is your roadmap 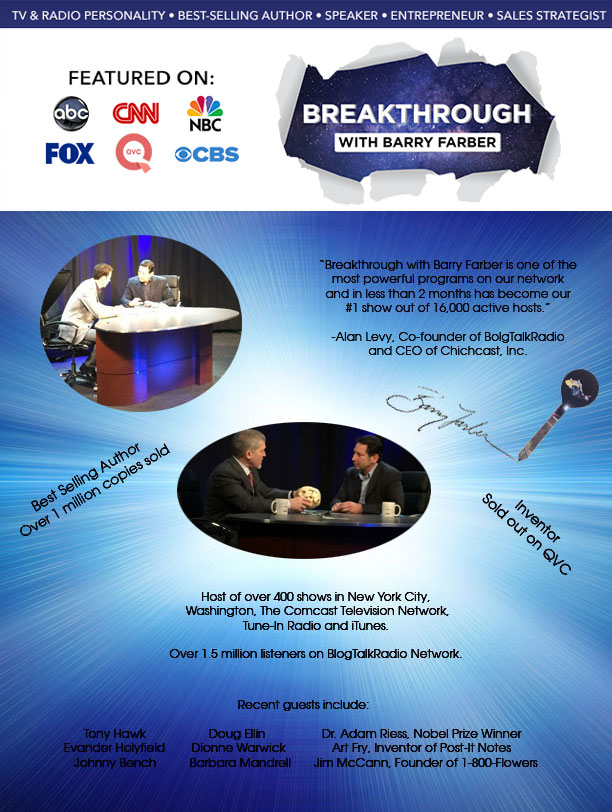 Barry lives in the trenches everyday as a Sales and Marketing Strategist for over 25 years. He’s generated millions of dollars of new business for his clients by gaining access to National Retailers and Major Accounts like Six Flags, QVC, Jets and Giants Stadium, Comcast and much more.

He is an award winning and syndicated host of several television programs including Breakthrough with Barry Farber and Mind Your Business.

Barry hosted over 500 Radio and Television shows in New York City, Washington and on the Comcast Television Network.

In addition to hosting his own show Farber has been interviewed on CBS, NBC, ABC, FOX, CNBC and CNN. He has also been featured in Ad Week, Investor’s Business Daily, Newsday, U.S. News & World Report, Variety and The New York Times.

Barry Farber asks the right questions and goes deep into the minds of each guest. See why Barry has had the no. 1 rated show, out of 16,000 programs with over 1.5 million dedicated listeners and received over 10 million downloads on the 39 episodes aired averaging 250,000 per show.

Barry has been a columnist for Inc. magazine and has written over 1000 columns for publications like Entrepreneur and Sales and Marketing Management and also a best selling author of 14 books in over 30 foreign languages with over one million copies sold.
Barry was rated as the “Top speaker of the year” by Successful Meetings Magazine.

What makes Barry’s speaking, consulting and training programs unique and practical are the real world applications he shares from his day-to-day activities. He can be seen as a regular guest on QVC selling out unique and innovative inventions since 1997, he was the broker and agent for the $7 million dollar Evel Knievel roller coaster that Six Flags Theme Parks launched the summer of 2008, winner of 3 Telly Awards and nominated for an Emmy as the Executive Producer and marketing agent of the Jackie Mason Television Show, Co-Inventor and Marketer of the FoldzFlat® Pen selling millions in the promotional, direct response and retail markets, agent for MLB Allstar Gary Sheffield and literary agent for ten time world champion skateboarder Andy Macdonald. He is also a Black Belt Weapons Regional and National Tournament Champion where he incorporates his martial arts experience into his presentations with an entertaining and inspirational message.

• Best Selling Author of 14 books in over 30 foreign languages with over one million copies sold.

• Launched Radio Show “Breakthrough with Barry Farber” on Blog Talk Radio and in less than 90 days had over one million listeners and rated the #1 show on the network out of 16.000 active programs.

• Co-Inventor and Marketer of the FoldzFlat® Pen selling millions in plastic and metal in the promotional, direct response and retail markets.

• Regular Guest on QVC selling out unique and innovative products since 1997.

• Host of over 500 Radio and Television shows in New York City, Washington and on the Comcast Television Network.

• Monthly Columnist for Inc Magazine and previously Entrepreneur Magazine for 10 years and rated #1 in content by reader surveys.

• Rated as one of the top speakers of the year in “Successful Meetings” magazine cover story.

• Winner of 3 Telly Awards and nominated for an Emmy as the Executive Producer of the Jackie Mason Television Show.

• Literary agent for the autobiography of Andy Macdonald, crowned skateboarding’s world champion 8 years in a row and owns 19 X Game medals – more than any other skater.

• Manager of Trigger Gumm, the Guinness Book World Record holder for the longest Motorcycle jump at 277.5 ft. (Also holds the record for height in jumping and going vertical at 80 feet in the air).

•The 12 Clichés of Selling and Why they Work
(Workman Publishing)

•Diamond in the Rough (Berkley/Penguin Publishing)

•The Adventures of Little Billy
(Children’s inspirational book series based on his international best selling book and Television series, Diamonds in the Rough)

• Barry Farber’s keynotes, seminars and consulting programs focus on the art of “breaking through” in sales, marketing, customer service and new business development. What makes his programs unique is his real world experience ranging from marketing his own inventions on QVC, representing Major League Baseball players and entertainers with their products, to helping corporations gain access to major accounts and close millions of dollars worth of business.

• All of his programs are customized to meet the goals and objectives of each organization along with research done in the industry so he understands their business environment.